Signal messenger app got a massive boost in downloads when WhatsApp forced users to accept a new user agreement that allows WhatsApp to share user data with Facebook.

After that, Signal devs opened a huge AMA thread on Reddit to answer a lot of questions about the future of the messenger and its open-source nature.

Some of the top answers:

> Signal is super promising right now but so was WhatsApp before being bought by Facebook. What public reassurance can you give that says Signal wont be another sellout?

> As a question: how do you fund the application? With the increase of users will you struggle/need more funding? Will we see an ad model in the future such as telegram aims to implement.

In addition, Signal Messenger beta for Android got better navigation between emojis and stickers in v5.0.8. There you can switch between both modes without losing your scroll position.

- Effortlessly swap between choosing emojis and stickers without losing your scroll position while you navigate how to best express your ever-shifting emotions.
- We said, "gimme a break" to some Android KitKat out-of-memory errors.
- Signal launches much faster than before so you can quickly catch up on what went down after your battery died.

Have you already switched to Signal as well? 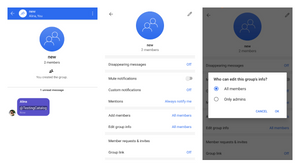